Analysis tools for comparing different control strategies with regard to their effects on the water balance and power generation in cascade reservoirs, as well as a training system for the control room personnel to simulate a wide variety of applications and scenarios.

The operation of a cascade of reservoirs is a demanding, complex task. Increasing automation and extreme events increase the training requirements of operating personnel, and there is also a growing need for specific electricity products (e.g. control power) due to the decline in electricity generation from fossil sources, among other things.

Existing, individual modules of cascade reservoirs including controls were combined and expanded with modules for determining performance in order to analyse and evaluate the effects of different control strategies on power generation and the water balance in the cascade. Studies of tipping and peak operation have shown that the cascade is well suited to the provision of control power and a tipping operation with almost identical water level tolerances is more advantageous.

In close cooperation with the project partners, the system was refined for use as a training simulator on a robust, industrial platform. The connection of the HN model of the reservoirs to the controls used on the systems, including the largely original user interface, enables the project partner LEW to use the familiar operating environment for training and education, as well as for analysing the effects of changes to the controls, incidents or manual interventions.

An interface for the integration of future technologies (e.g. a higher-level control for discharge compensation), was included in preparation for the developing, dynamic requirements of cascade operation. The methodology and the system can be transferred to other river systems. 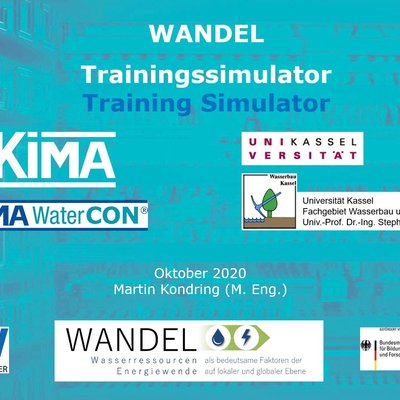 Demonstration of the training simulation with various scenarios