In a web-based Decision Support System (DSS), the results of numerical modeling are linked to an analytical live processing routine. This allows stakeholders to develop their own scenarios and come up with solutions to optimize the use of groundwater resources.

The DSS supports stakeholders in making the most efficient use groundwater – a limited resource – in the Western Mountain Aquifer in Israel and Palestine. Within the framework of interactive maps, the effects of climate change and land use change on the development of water resources are visualized and statistically evaluated and made available for download (tools "Base data" and "Statistics"). Users can access the results of numerical MODFLOW modeling by the TU Berlin up to the year 2070, among other things.

In the "Groundwater modeling" tool, users can also call up MODFLOW model runs, set and configure new wells (define pumping rates or infiltration rates) and, in a subsequent post-processing routine, calculate well funnels and groundwater level drawdowns live using an analytical THEIS function. A time delay due to long calculation times is avoided, which increases user-friendliness in terms of decision support with immediate system response. Access to the DSS and the GUI also enable stakeholders who are not involved in the MedWater project and do not have advanced modeling knowledge to effectively use the system to create their own scenarios. Data processing is carried out using the high-performance HDF5 or netCDF formats in conjunction with Virtual Raster Technology (vrt). The web-based DSS was implemented in responsive design so that it can also be used with mobile devices (tablets). Adaptations and transfers to other regions of the Mediterranean can be realized without any problems if the data is available. 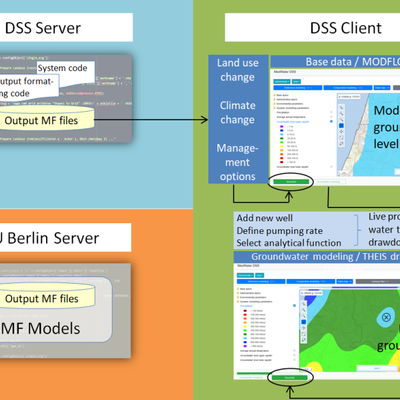 Link to the Technical Note

Concept of a web-based DSS and live processing tool 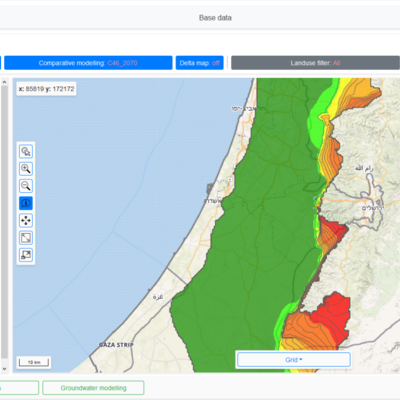 Link to the DSS