Each water level time series is calculated for a single virtual station. A virtual station is the average position of intersection between an altimetry ground track and the inland water body of interest.

Depending on the sampling rate of the altimeter and the geometry of the virtual station, multiple range measurements are collected during each overfly. Range measurements are first corrected for path delays caused by the atmospheric (wet tropospheric, dry tropospheric, ionospheric, and inverse barometric) and geophysical effects (solid earth tide, ocean tide, pole tide, and sea state bias). The water level is then calculated by subtracting the corrected range from the satellite altitude. In the final time series, the water level at each date is defined to be the mean (or median) of all estimations for that date. Ultimately an iterative outlier rejection algorithm is applied to the output time series in order to identify and remove the outlying measurement.

Virtual altimetry gauging stations help water authorities monitor rivers, lakes, and reservoirs, especially when establishing an actual gauging station is not feasible – e.g. around inaccessible or politically sensitive areas. This will enrich the water monitoring databases, and provide valuable information during hazards – e.g. the mid-March to April 2019 flooding in Iran which destroyed several water gauging stations. Moreover, the altimetry-derived water heights are shown to be effective in hydrologic and hydrodynamic modeling and discharge estimation. Another less emphasized application is the potential in resolving transboundary water disputes – e.g. the conflict between Sudan, Egypt, and Ethiopia over filling of the Grand Ethiopian Renaissance Dam (GERD). 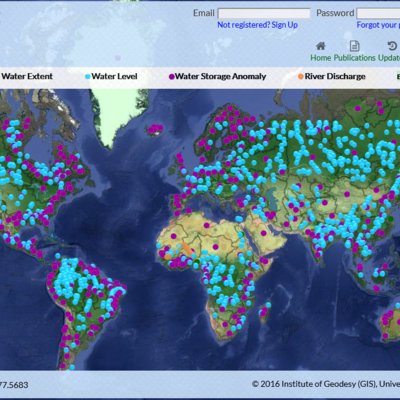